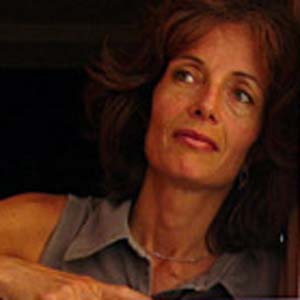 1987 - she graduated in Zurich as a nurse, specializing in pediatrics.

At the same time she took her first course in oil painting, aqua-tint and etching.

1994 - she participated in a felt-making course in the valley of Calanca.

1995 - as a self-taught woman, she embarked upon her first project using carded wool while working for the Rudolf Steiner school in Origlio. Here she developed her exclusive technique of applying carded wool to various layers of fabric, without it felting.

She then deepened her knowledge of popular fairy tales, from which she created momentary images that represented them, while giving the viewer’s imagination the space to interpret them.

1999 - she began to create her original felt jewellery collection.

2004 - she launched the first postcards (Lanakarten) and photographic reproductions of her original carded wool panels.

2007 - she produced her first series of artistic prints on canvas.

2014 - the first issue of the birthday calendar was published.

Fairy tales depict the inner experience of human life in visual language. It reveals itself as a pictorial history of the development of humankind, and thus, of the individual through all levels of perception.

Fairy tales give human beings the innate ability to transform and develop.